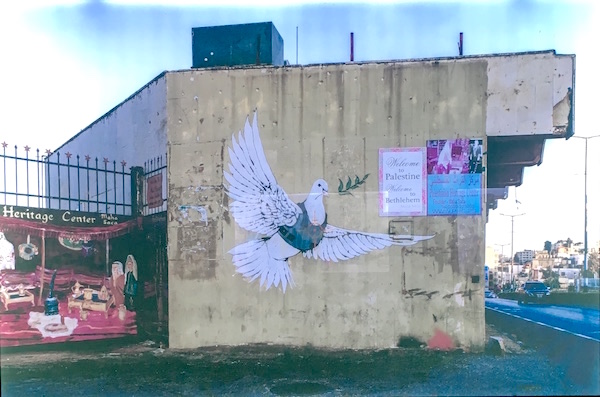 If there is a contemporary artist who has been able to reveal the interest of street art and the philosophy hidden behind this illegal art, it’s Banksy.

Reaching everybody, supporting social and economic issues, Banksy‘s art goes well beyond a simple graffiti on a wall. Each work is carefully studied meticulously before and the way of delivering the message is always between sarcasm and humor. Oscillating with a concrete approach to the highlighted topics : the Israeli-Palestinian conflict, capitalism, the digging of social classes or the persistence of dictatorships.

As an assumed protester artist, the English artist plays with the clichés and always manages to arise where he is not expected. In August 2015, he launched his ephemeral Disneyland in his image with the help of 58 artists. Dismaland came to confront a dismal world with the utopia imagined by the American group. In October 2018, he voluntarily self-destroyed one of his works, The girl with a balloon, at an auction held in London by Sotheby’s. In March 2017, he launched the Walled Off Hotel in Bethlehem to show his support for Palestine. What had to be just a happening became a real world phenomenon and Banksy, contrary to his habits, wanted to leave him in his place in order to perpetuate his contribution to the local economy, this hotel being located just in front of the erected wall. by the Israeli government.

In the Banksy‘s world, balloons become doses of hope, the rats the representatives of the low social classes and monkeys become the main actors of this world often insane and always too violent. The police is of course never far away.

In Banksy‘s graffiti, we find the influence of Andy Warhol‘s pop-art, a rapprochement with his American counterpart Shepard Fairey, a protest artist of the same generation, but also a passion for art in general across all currents. Banksy’s art seems to know no limits.

If there is an exhibition that you don’t have to miss this summer is Banksy‘s one at the Cordoaria Nacional in Lisbon. Thought for both children and adults, it unveils the underside of an always mysterious art that has not stopped attracting attention and Banksy remains true to himself, always hidden in the shadows .