LA MAISON ROUGE presents Plus jamais seul, Hervé Di Rosa and the modests arts until January 22nd 2017. This monographic exhibition contains a selection of the artist’s achievements, but also a large part of the objects he collects with passion. Hervé Di Rosa is inspired by sacred art, pop culture, or even raw art, this is why his work is described as modest art.

Hervé Di Rosa comes from a popular milieu and loves what is modest, so naturally his art is also qualified as modest.

It is his trademark. He claims loud and clear that his first sources of inspiration are comics and cartoons as well as art books with reproductions, especially those of Dubuffet, Picabia or Matisse.

In 2000, the artist founded in Sète the MIAM (International Museum of Modest Arts) in which he exposes exhibition after exhibition the many facets of this modest art. 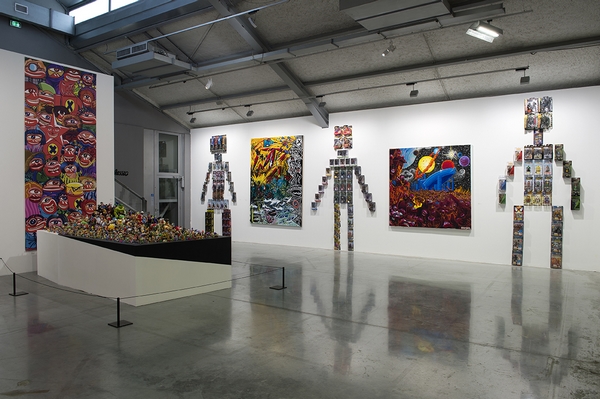 « Has ties with popular art, primitive art, art brut, but is also more than that. It takes in mass-produced objects just as much as one-offs, most with little monetary value but vast emotional worth. Beyond the critic’s view, the notion of good or bad taste, or aesthetic rigour, admirers of modest art are joined in a spontaneous, of-the-moment delight that is tinted with childhood memories and simple, nontheorised pleasures. »
Hervé Di Rosa 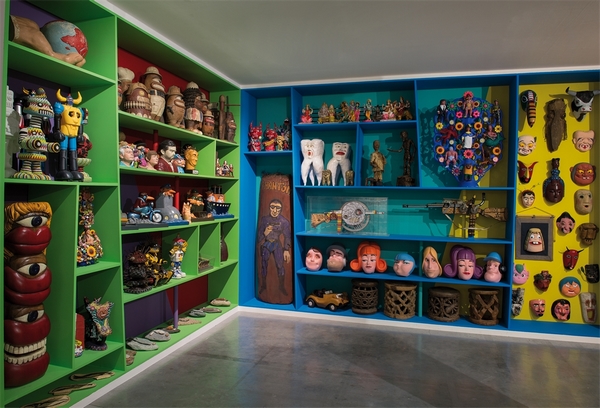 The exhibition area makes it possible to navigate between the different universes of the artist, it’s a journey literally and figuratively. Indeed, many items collected come from abroad.
Africa and Mexico are great sources of inspiration for Hervé Di Rosa who doesn’t hesitate to mix traditional art with this popular culture that is important to him. By exhibiting his imagination and all his references, the artist brings us into his world. A world in which one would like to stay much longer than the initial duration planned to cover the exhibition.