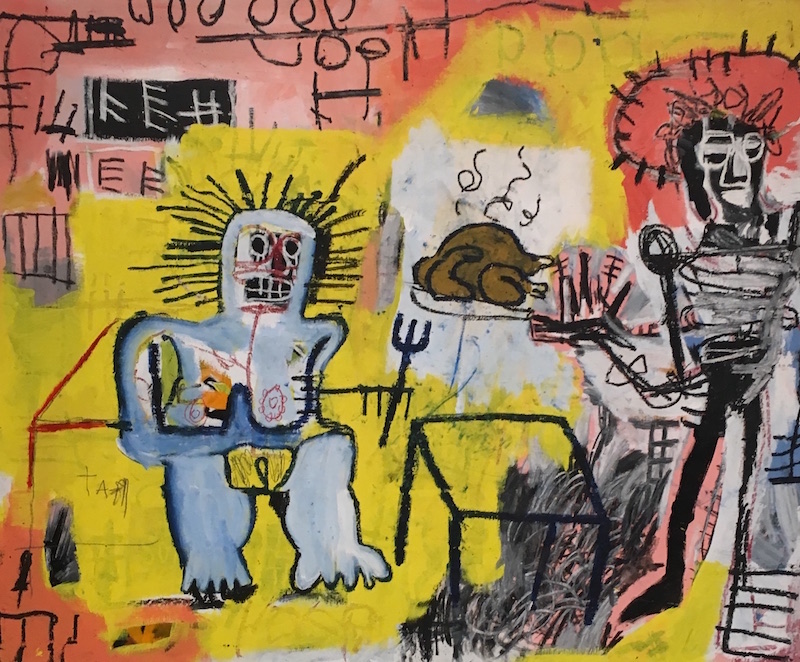 During our last Parisian trip, we went to the Jean-Michel Basquiat exhibition at the Louis Vuitton Foundation to admire his 120 artworks presented during this retrospective.

Well known to public for his artistic talent mixing modern painting, street art and graffiti claiming his era, Jean-Michel Basquiat has also remained a reference in the hip-hop world of the 80s.

His mother was Puerta Rican and his father was born in Haïti, this artist grew up between Brooklyn and Manhattan. A long stay in the hospital following a car accident, when he was 7 years old, will give him the special desire to know everything about human anatomy. It will also appear several times in his artworks. His mother, Matilde Andradas, will pass on her passion for art making MoMA his favorite playground and Picasso one of his first idols. Jean-Michel is only 10 years old when he receives his pass as an unlimited visitor.

Teenager tormented, drugs and the street attracts him. Without ever forgetting his passion for drawing, he finds his way of expressing it through graffiti, thus becoming SAMO at the age of 16. An environment far from the privileged sphere in which he will have been educated. SAMO systematically signs his works of manifestos.

After several years of tagging exterior walls of New York art galleries, Jean-Michel Basquiat became one of the main actors of the latter offering his first solo exhibition in 1981. SAMO became again Jean-Michel Basquiat. Through his works he delivers his love for music, jazz and hip hop as well as his passion for literature and words.

Growing up really fast with success, Jean-Michel Basquiat has the artistic world for him when he begins to sink in the middle of the night, to let down gradually his relatives and collaborators. The artist wants more without knowing that his meeting in 1982 with Andy Warhol will mark a new turning point in his career. They will produce together more than 50 works. The meeting between these two solitary souls will give birth to a true friendship. Unfortunately, Jean-Michel Basquiat has never managed to recover from his addictions and will die a few years later at the age of 27 from an overdose.

During his life, the artist never forgot his origins and the activism he chose to join as a teenager. A cause fighting for the right of the black people in the United States.